Exposed: the secret life of cells

Last year, the Nobel Prize for Chemistry was awarded to Eric Betzig, William Moerner and Stefan Hell for developing powerful new microscopes capable of looking at cells in unprecedented detail. Known as super-resolution imaging or optical nanoscopy, this new technology allows scientists to ask fundamental questions about how cells work that previously could only be speculated about. Professor Christian Eggeling (a group leader in the WIMM Human Immunology Unit and the scientific director of the new imaging facility at the institute) worked as a senior scientist with Stefan Hell, and here Dr. Bryony Graham explains how Prof. Eggeling’s team has in collaboration with some of his old colleagues been using optical nanoscopy to observe novel details on how molecules interact on the surface of the cell, otherwise known as the cellular membrane.

Until very recently, the cells in our bodies sat quietly in their respective organs, carrying out their individual jobs and generally minding their own business.

Then, some pretty smart scientists started building microscopes that could not only see details on their surfaces with spectacular accuracy, but could also see straight past their outer boundaries and could start to delve into their most innermost structures. Suddenly, all their intimate secrets, elusive to scientists for decades, were revealed.

Well, almost. Unsurprisingly, it’s actually pretty hard to build these sorts of microscopes, and in some cases they are quite literally one of a kind – the only machine of its type to exist anywhere in the world.

Optical nanoscopy is a very new, highly specialized field, allowing for the first time to surpass the long-standing resolution limit of conventional optical microscopy of living cells. The WIMM is fortunate enough to have recently been granted funding by the Wolfson Foundation and MRC to establish a world-class imaging facility where a team of scientists are setting up cutting-edge methodologies that allow us to peek into the secret life of cells for the first time.

In a recent paper published in Nature Communications, Christian Eggeling’s team has in collaboration with members of Stefan Hell’s group used these powerful microscopes to look in exceptional detail at the cell membrane: the wobbly surface of each of the cells in our bodies that scientists have often thought might be rather more complicated than it first appears, but have had no satisfactory means by which to test their theories – until now.

The cell membrane isn’t just a thin skin stopping the insides of a cell spilling out. It’s a highly dynamic, complex structure, full of proteins and fats that move around in it all the time. But these bits and bobs aren’t just floating around – the fats and proteins play a role in letting stuff in and out of the cell and allowing the cell to sense what’s going on in the environment around it.

Historically, it has been thought that fats (or lipids) can organize themselves in specific regions of the membrane known as ‘lipid rafts’. These ‘rafts’ (or lipid nanodomains) are thought to be densely packed with lipids and specific proteins, and are important for the communication between the cell and the outside world. 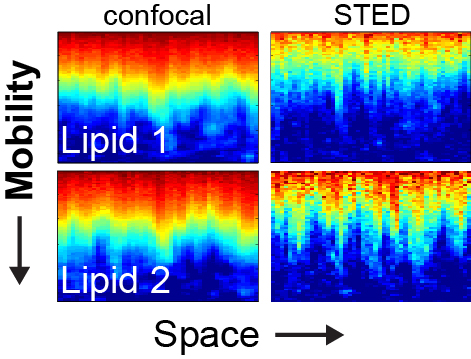 As a consequence, researchers built up model systems of membranes with a mixture of lipids that self-organize into phases of different molecular packing, thought to mimic the ‘rafts’ in the cellular membrane, at least from a physics point of view. However, until now a lot of debate remained on whether such simplified system can at all model situations in the complex world of the living cell.

But Christian Eggeling’s team have managed to do just that – or rather, not. They applied novel observation techniques on an optical nanoscope in order to look at the movement and interaction sites of fats and lipids in the cell membrane with unprecedented resolution.

And they couldn’t see anything that convincingly looked like a lipid ‘raft’, at least when compared to the situation in model membranes. Using fluorescently tagged lipid analogs, they saw that all of these moved around dynamically, with some of them forming 1/1000-second long interactions with other membrane molecules at certain hot spots, which were themselves transient within the second range only – but never stable, ‘raft’-like structures and no correlation with the lipid’s behavior in the model systems.

Their findings, clearly illustrate the immense power of optical nanoscopy, and how it sets to revolutionize the field of biology.

Quite literally, watch this space.