Formaldehyde might be familiar to most of us as the pungent liquid used to preserve animals and organ specimens, but research from the Patel group finds that the body actually produces its own significant amount of formaldehyde too.

Now, in a paper published in Molecular Cell, the team have discovered a new human disease caused by the accumulation of this endogenous formaldehyde.

Formaldehyde preserves biological specimens by chemically reacting with proteins and DNA crosslinking them, making them very resistant to degradation. This preserving process also destroys the ability of these proteins and DNA to function, making it highly toxic to cells.

The Patel group has previously revealed that not only does the body produce formaldehyde as a by-product of essential metabolic processes, including the breakdown of the vitamin folate, and also found that we have enzymes that protect us from its harmful action. Formaldehyde is removed by the enzyme alcohol dehydrogenase 5 (ADH5). If some of the formaldehyde evades this first tier of defence, DNA repair enzymes can be recruited to fix any resulting DNA damage. This two-tiered defence mechanism provides effective protection against formaldehydes. However, if both these processes are removed or faulty, animals accumulate irreversible DNA damage causing multiple organs to fail and blood production to cease.

In their most recent study, Felix Dingler and Meng Wang worked with others in the Patel team to find out whether the second tier can always make up for loss of ADH5, or if there are additional enzymes involved in formaldehyde clearance.

Aldehyde dehydrogenase 2 (ALDH2) is what's known as a tier-1 enzyme, involved in clearing the similarly toxic aldehyde species acetaldehyde, known for being a product of the metabolism of ethanol in alcoholic drinks.

They discovered that most mice lacking the enzyme aldehyde dehydrogenase 2 (ALDH2) as well as ADH5 did not survive long after birth. The few that did had stunted growth, defects in their immune systems and blood, and aged prematurely.

Despite showing evidence of increased DNA repair responses, cells from these double-deficient mice accumulated higher levels of DNA damage and mutations than controls, highlighting the importance of metabolic detoxification by tier-1 enzymes. Strikingly, as Felix Dingler, co-author of the study, says: “The mutational pattern revealed by the formaldehyde-accumulating mice shares remarkable similarity to known mutation patterns found in human cancer samples for which no cause has been identified thus far. This work raises the possibility that formaldehyde from within the body might be an important contributor to these mutations.” 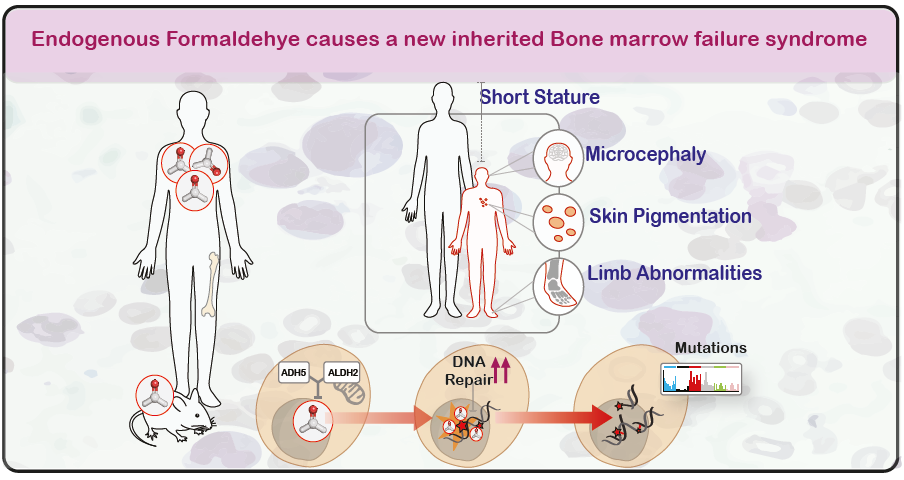 ALDH2 deficiency is a common genetic trait in East Asia, affecting about 500 million people worldwide and is responsible for the flush reaction some people experience following alcohol consumption. To understand this human connection, the researchers collaborated with Prof Minoru Takata at the University of Kyoto, who identified several families where combined ALDH2 and ADH5 mutations were passed on from parents to children. These children are born with severe developmental defects, later developing bone marrow failure and leukaemia.

Studies on cells obtained from these patients indicated that their DNA repair processes run into overdrive. Prof Patel said “We think that these really high levels of DNA repair processes are probably because the cells from these are accumulating dangerously high levels of endogenous formaldehyde that cannot be cleared. We think that formaldehyde accumulation in humans defines a new human disease.”

“This new research also establishes how and why most of us are protected against this very simple but highly reactive ubiquitous molecule.”

The Patel group now plan to investigate where this formaldehyde is produced in us and how it specifically damages blood production. This may lead to interventions that could reduce its mutagenic effects.

Dr Stephen Twigg has been announced as one of eight new Principal Investigators by the Radcliffe Department of Medicine.