What’s in a brain?

Studying human neurological diseases has always presented scientists with a major challenge due to the ethical and clinical inaccessibility of living human brain tissue. In order to circumvent this problem, scientists have turned to an exciting new approach: taking skin or blood cells from a patient with a neurological disease, and turning them into brain cells in the lab using cutting edge stem cell technologies. These lab-derived brain cells arguably represent the best currently available method to study human neurological diseases in a lab without the need to obtain brain tissue directly from the patient. As with every experimental model, however, scientists need to ask: “How well does this actually mimic real thing?” An answer to this question was provided in a recent study designed by Dr. Handel from the Neurogenetic Disorders Group and led by Zameel Cader at the WIMM. Bryan Adriaanse, a DPhil student in the Cader lab, explains more.

To ask whether brain cells derived in the lab truly represent what is actually happening inside the human brain, the researchers decided to look at cortical nerve cells, a class of brain cells that are found in the outer region of the brain (i.e. the crinkles that cover the brain surface).

This region is built up out of 6 layers, each possessing its own subset of different types of brain cell. The team were interested to see whether the brain cells that had been derived in a disorganised two-dimensional environment in the lab had the same properties as cells from the brain which had developed naturally in a highly organised, 3-dimensional structure.

To investigate this question, the team compared their lab constructed brain cells with extreme precision to data generated by other scientists from the brains of both adults and foetuses. In a first set of analyses they specifically looked at the molecules present inside the cells that confer different types of brain cells with different properties.

Previously, scientists had identified a set of these molecules that they expected to be found in different layers within the outer region of the brain. These expectations were based largely on studies undertaken either in mice or in foetal brains, but with this careful analysis, the Cader lab found that these ‘markers’ of the different layers were less reliable than previously thought. 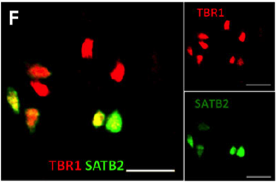 TBR1 (a deep layer marker) and SATB2 (an upper layer marker) which are expressed together in the same cell (yellow) in brain cells grown in the lab. Previously, these two markers were thought to be mutually exclusive and unique to either the upper layer or lower layer respectively, but the findings in this paper dispute this view.

This is crucially important for scientists studying human brain disease and function, as it is critical to be able to identify which cells are being affected by a disease and therefore need further investigation.

Lastly, they showed that molecular signatures inside the lab-derived brain cells showed signs that the cells had been grown in a synthetic rather than a natural environment – but this did not detract from the striking similarity which the lab-derived cells showed to cells which had been isolated directly from foetal brain.

This research has important implications for using brain cells derived in a lab to better understand neurological disorders of later life such as Alzheimer’s Disease in which age related changes have a significant impact on disease onset and progression. Nevertheless, this study suggests that lab-derived neurons are very similar to those that have developed normally in the foetal brain, and that these cells are a therefore a good starting point to study human neurological diseases in the lab.

Post edited by Bryony Graham and Zameel Cader. This work was funded by the BRC Dementia Theme and IMI StemBANCC.