Scratching the surface: how to kill a cancer cell

The side effects of many cancer treatments are notoriously damaging, sometimes to the extent that they have a greater impact on the health of the patient than the cancer itself. The reason for this is that cancer drugs also kill healthy cells as well as the cancer cells, and so scientists are working hard to try and develop ways to deliver drugs specifically to the cancer itself. In this blog post, Pete Canning, a postdoc working in Terry Rabbitts’ lab in the MRC Molecular Haematology Unit, describes recent research from the lab which uses information about the proteins on the surface of the cell to do just that. Read on to find out more.

One of the reasons cancer is so difficult to treat is that cancer cells are versions of your own healthy cells that have become damaged. This means your immune system won’t attack them because it recognises them as your own cells, and chemotherapy drugs designed to kill cancer cells frequently kill healthy cells at the same time.

Antibodies are part of our immune system. They are proteins that attach to one specific target protein. Normally they attach to a protein on an invading virus or bacterium and direct the immune system to destroy it.

It’s absolutely crucial that antibodies only recognise their target protein and nothing else, because the immune system needs to be able to tell apart dangerous invaders from your own cells.

This is an incredibly useful property. If you know that cancer cells contain a protein that healthy cells don’t, you can make an antibody that recognises that protein. The antibody will recognise cancer cells and not healthy cells, which can be used to develop new treatments for specific types of cancer.

There’s a problem though. Many of these cancer-specific proteins are contained inside the cell, safely tucked away behind the cell membrane. Small things like drugs can get into the cell, but antibodies are large and usually can’t get through the membrane.

New research from Terry Rabbitts’ group at the WIMM looks to address this problem by looking for marker proteins that are on the outside of the cell instead of hidden inside it. If a protein, or part of a protein, is on the cell surface then an antibody can recognise it easily (see diagram below). 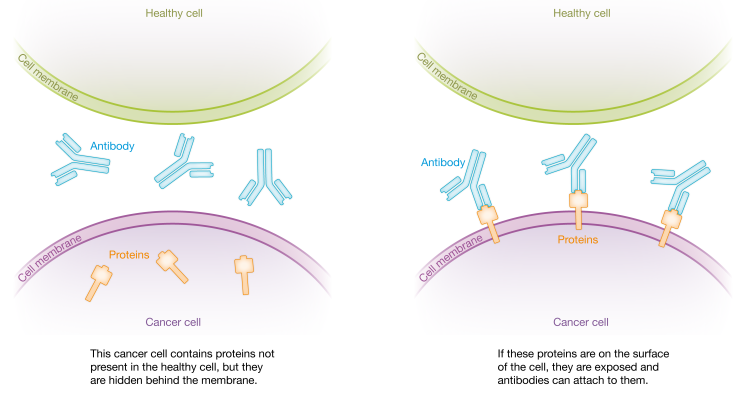 The breast cancer drug Herceptin is a famous example of this. It is an antibody that attaches to a protein called HER2. Part of the HER2 protein pokes through the membrane to the outside of the cell, where the antibody latches onto it.

Using genetic information, researchers in the Rabbitts’ lab assembled a detailed database of proteins that are found on the surface of all cells. Next, they analysed cells from a type of bone cancer called Ewing’s Sarcoma. They looked for proteins present in the cancer cells but not in healthy ones.

This gave them a short list of possible cancer-specific cell surface proteins, but one stood out as the most interesting – a protein called LINGO1. They were able to show that LINGO1 is on the surface of almost all Ewings Sarcoma cells, but not of healthy cells. This makes it an ideal marker protein.

They then showed that this information could be used to safely kill these cancer cells. They took an antibody that recognises the LINGO1 protein and attached a chemotherapy drug called doxorubicin to it. They treated cancer cells and healthy cells with this antibody-drug combination. The antibody recognised LINGO1 on the surface of the cancer cells and was absorbed into the cells. This released the attached doxorubicin into the cells and killed them. The healthy cells were left unharmed (as illustrated in the diagram below). 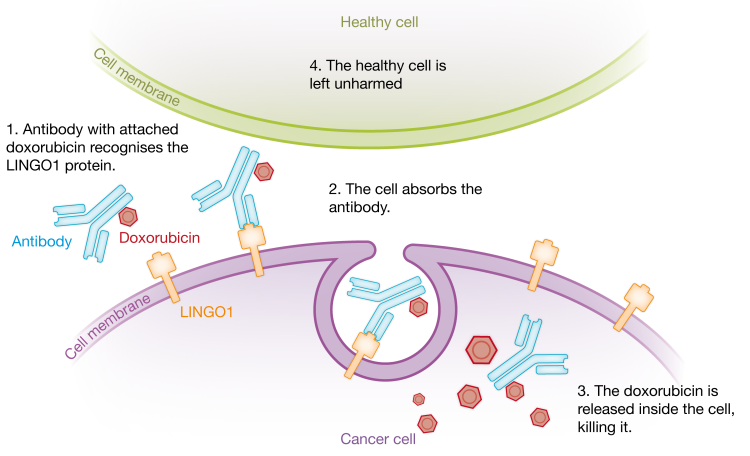 These experiments were performed on cells grown in a dish in the lab, so we don’t know yet whether this treatment will be as effective in humans, but these results are very promising. The technique could also be used to identify new marker proteins in many other types of cancer, so it could also allow the discovery of other novel cancer treatments in future.