It’s not all about sex: there’s a biological clock ticking in fathers too

It is well known that as a woman ages, the number and quality of eggs that she produces declines – making it more challenging to conceive later in life, and increasing the risk of difficulties during pregnancy. But what about men? In a recent study published in PNAS, a team of Wellcome Trust-funded scientists led by Andrew Wilkie and Anne Goriely at the WIMM have shown that older fathers are at a greater risk of having children with genetic diseases such as dwarfism and craniofacial malformations. In this blog, Geoff Maher, first author on the paper, explains what they found.

With the ongoing trend for delayed parenthood, there is much interest in the possible effects that having children later in life has on the offspring’s health. Although the emphasis has typically been on maternal age due to the increased risk of disorders such as Down’s syndrome, recently the effect of paternal age has come under greater scrutiny.

Unlike for women, who are born with all the eggs that they will ever need, and won’t produce any others, men produce millions of sperm daily throughout adult life.

In the testis sperm production occurs in long tubes (tubules) that contain specialised cells called spermatogonial stem cells (SSCs). Every 16 days SSCs copy their genome (all 6 billion letters of DNA) before splitting into 2 cells: one will stay as an SSC and the other will go on to make sperm.

However, the process of copying DNA is not 100% accurate and every time an SSC divides there is a small chance that a few letters of the DNA will be miscopied, just like a typo. Therefore, over time, SSCs are believed to accumulate mutations that may be passed on to the next generation via sperm.

In fact, due to such copying errors, each one of us is born with approximately 30-100 changes to single letters in our DNA code (point mutations) that were not present in our parents. Most of these spelling mistakes come from the father’s sperm and the number of mutations in each sperm cell typically increases as men gets older, at a rate of ~2 per year.

The majority of these mutations have little or no effect on the health of the father’s children, but if by chance a mutation occurs in an important region of the DNA, it may lead to disease.

Because these mutations arise randomly, the chance that a sperm will carry a mutation at any given position in the genome is extremely low (in the order of 1 in 100 million). But some mutations arise much more commonly than this. For example, Prof Andrew Wilkie and Prof Anne Goriely have shown that essentially all men produce much higher levels of mutations that cause Apert syndrome, a severe craniofacial disorder that affects 1 in 65,000 births.

Apert Syndrome is one of several “paternal age effect” disorders – severe genetic disorders affecting children who have no family history of the disease and whose fathers are typically older than the population average (~32 years). Paternal age effect disorders are caused by mutations that arise in the SSCs of normal men and are passed on in his sperm. Strikingly, these paternal age effect mutations occur in sperm of any man up to 1000 times more frequently than other mutations.

So why do these specific mutations occur so frequently and why in particular are older fathers at greater risk of having children with these disorders?

A clue to help solve this problem came from the fact that identical mutations arising spontaneously in other parts of the body can lead to the development of cancer – that is, uncontrolled cell growth and division, eventually leading to the growth of a tumour.

Professor Wilkie and Professor Goriely proposed that in the testis the paternal age effect mutations act in a similar manner, leading to preferential growth of the SSCs which carry these mutations. The mutant SSCs are predicted to multiply and spread along the tubules over time, thereby substantially increasing the levels of mutant sperm produced with age – and therefore the likelihood of an egg being fertilised by the mutant sperm.

Despite the fact that all men are predicted to have multiple independent little growths of mutant SSCs in their testes, and that testes have been studied intensively by fertility researchers for decades, such events had never been reported.

We began our search for these growths by analysing thin slices of human testes (that had been donated for research purposes) under a microscope. In most samples we found small regions of tubules with a distinct appearance that was suggestive of abnormal growth of SSCs (see figure below). 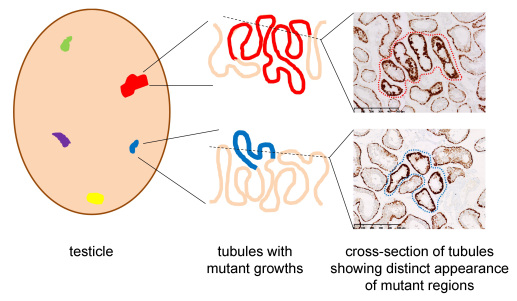 Cross-section of mutant tubules found in human testes (highlighted in red and blue, top and bottom right respectively). The darker, thicker boundaries of the tubules shows the increased growth of the cells in these regions.

To prove that these correspond to the predicted mutant growths, pieces of the abnormal tubules were isolated using a laser-assisted microscope, and the DNA from the isolated cells was extracted and analysed to look for mutations that were only found in the abnormal tubes, and not in their normal counterparts.

In 13 of the 14 testes analysed, mutations were found that cause a range of severe genetic diseases, including Apert syndrome and other paternal age effect disorders such as lethal forms of dwarfism.

This study shows how specific mutations can cause SSCs to act in a selfish manner, promoting their own growth but at the same time producing sperm that cause severe disorders in the next generation.

In essence, all men will develop these mutant growths within their testicles as they age, and with the trend for delayed parenthood, it is important that we understand the potential risks associated with starting a family later in life. Studying these mutant growths will enable us to identify how they grow, and the full range of diseases that they cause in the next generation (in addition to the diseases mentioned, older paternal age is also associated with autism, schizophrenia and some cancers). Armed with this knowledge, scientists and doctors will be able to better advise older fathers of the risks they may face when having children.