A new study from the Patel Group sheds light on the mechanism by which DNA damage suppresses appetite, a finding with implications for understanding the appetite lowering side-effects of chemotherapy.

In the paper, published in the journal Nature, researchers from the MRC Weatherall Institute of Molecular Medicine along with colleagues at the MRC Laboratory of Molecular Biology in Cambridge, and Hubrecht Institute in Utrecht, describe a mechanism by which our bodies recognise and respond to toxins and chemotherapy.

The researchers engineered this model so that the mice would accumulate formaldehyde. Formaldehyde is a very toxic molecule often used in embalming, but previous work from the Patel Group showed that formaldehydes accumulate normally in cells as by-products of metabolism and cell growth. Some of this formaldehyde likely comes from dietary sources. Remarkably, the mice that both could not clear formaldehyde and also could not repair damaged DNA, developed all the features of Cockayne syndrome in humans.

They then asked why these mice developed kidney failure and severe weight loss. This analysis led them to discover that DNA damage in a particular cell type in the kidney (proximal tubule cell), causes it to secrete a factor called GDF15 into the blood stream that signals to the brain to suppress appetite. 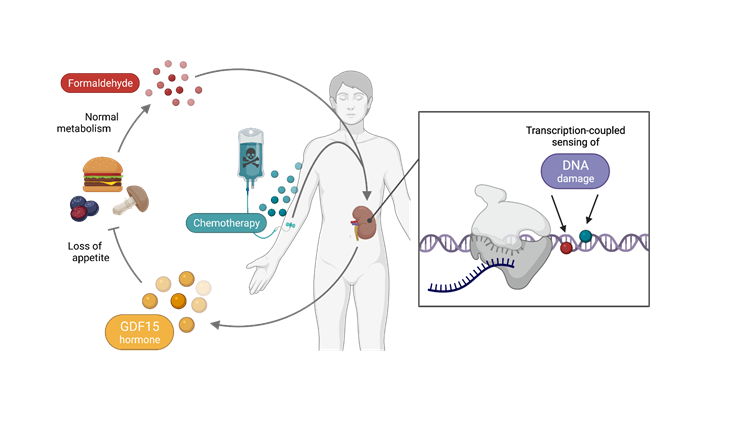 © New research shows that the accumulation of formaldehyde through metabolism, ingestion or chemotherapy can lead to DNA damage which in turn leads to secretion of GDF15 into the blood stream, resulting in loss of appetite. (Credit: Dr Juan Garaycoechea)

The blood is constantly filtered by the kidneys to make urine. Formaldehyde and perhaps other food derived toxins in the urine then damage the DNA in the kidney cells, driving the secretion of GDF15 into the blood. GDF15 then binds to its receptor that resides in the feeding centre in the brain. In Cockayne syndrome, the failure to repair the toxin-derived damaged DNA results in the failure to stop the release of GDF15, thereby explaining the relentless weight loss present in patients with this illness.

The researchers also report that when mice are treated with the chemotherapeutic agent Cis-Platin, the kidney cells are activated to secrete the same hormone. The similarity in mechanism and response suggests this process may be an important target for treating the appetite suppressing side-effects of cancer treatments.

“The discovery of the unexpected connection between DNA damage and food intake opens up opportunities to therapeutically interfere with this response, in order to improve the nutritional state of the many people undergoing cancer chemotherapy and children with Cockayne syndrome.” says Professor KJ Patel, Director of the MRC Weatherall Institute of Molecular Medicine and the MRC Molecular Haematology Unit who led the study. He added “we think that this food aversion response might have evolved in mammals to provide protection against the ingesting toxic food sources”.

Read the full paper in Nature.