How do multiple enhancers control the activity of a single gene? A new paper from Marieke Oudelaar in the Hughes/Higgs groups presents a novel approach called “Tri-C”, which uncovers how cis-regulatory elements interact together in higher-order structures. This fusion of innovative bench techniques and computational analysis is at the heart of MRC WIMM Centre for Computational Biology (CCB) with the lead author and PI holding positions in both the CCB and MRC Molecular Haematology unit (MRC MHU), bringing together cutting edge bench and computational technologies in one group.

How do the cells in our body know what they should be doing? Different cell types have specific patterns of gene expression, which are controlled by cis-regulatory elements, such as promoters and enhancers. These elements act like switches that can turn genes on or off. Although promoters are typically located directly upstream of the genes they regulate, enhancers are scattered around their target genes and can be located as far as a million base pairs away. To turn a gene on, enhancers must physically interact with the promoters of the genes they regulate. To facilitate this physical interaction between gene regulatory elements, chromosomes are folded in specific structures, often called chromatin loops or domains. In the Hughes and Higgs labs we are interested in understanding how these structures are formed, how the cis-regulatory elements within them interact and what the importance is of this layer of gene regulation for human disease.

To study the structural interactions between cis-regulatory elements in chromatin domains, we use methods based on Chromosome Conformation Capture (3C). These techniques rely on crosslinking of DNA sequences that are close together in the cell nucleus. These crosslinked structures can be fragmented using restriction enzymes, and fragments that were close together in the nucleus can be pasted back together in a proximity ligation reaction. This results in a 3C library containing long strings of DNA, in which the order of re-ligated fragments reflects the structural organisation of the genome in the cell. By quantifying the newly formed ligation junctions in these 3C DNA strings, we can work out which DNA elements are physically interacting in the cell nucleus and thus which regulatory elements might be important for the expression of genes of interest. 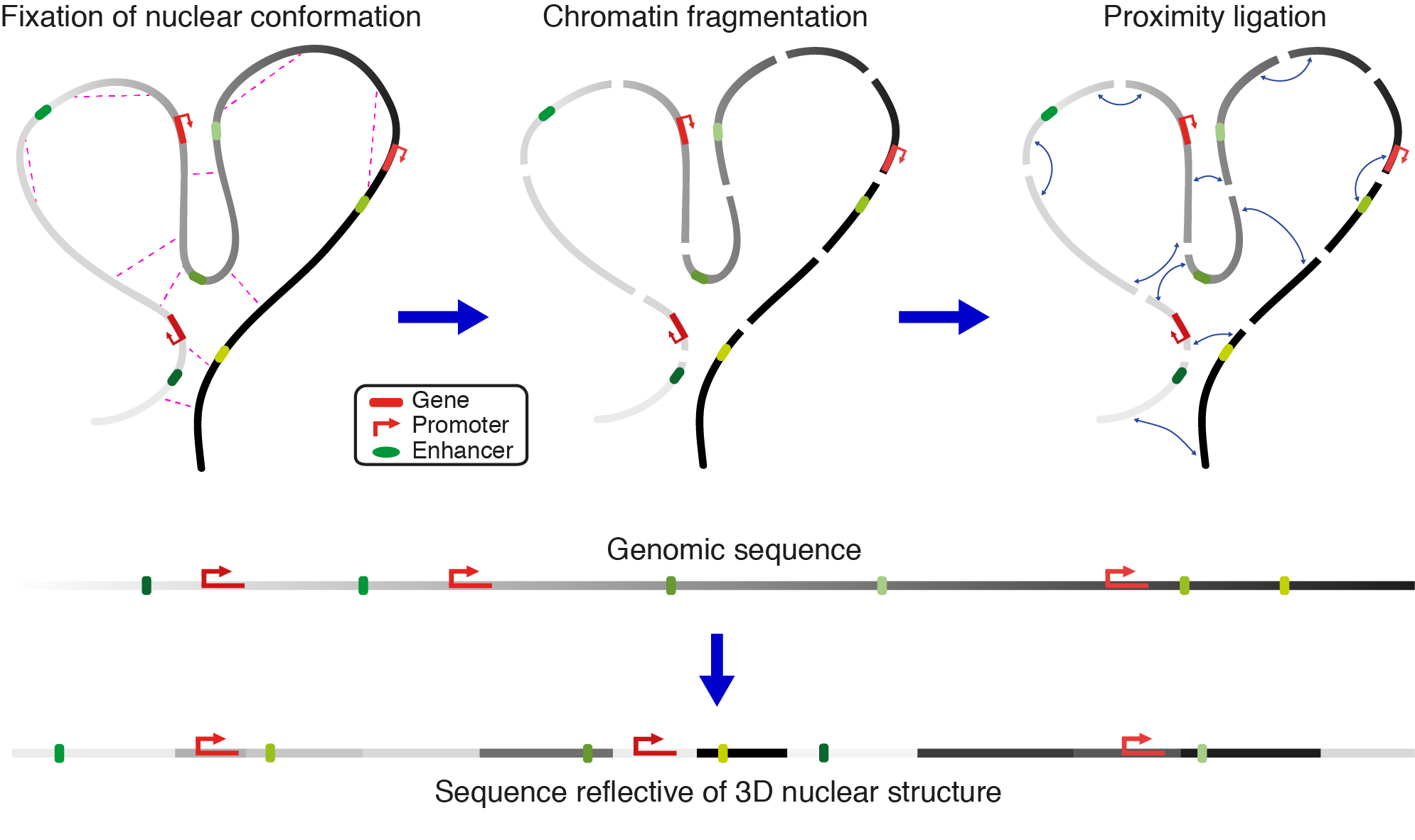 However, a big limitation of current 3C techniques is that they focus on pairwise interactions in populations of cells. This means that they can only analyse 2D chromatin interactions that represent averaged structures in millions of cells. During my PhD, I wanted to investigate the dynamics of these structures in 3D in single cells. One question which particularly interested me was whether multiple enhancers and promoters located within the same chromatin domain all interact together in complex hub-like structures, or if these elements compete for pairwise interactions involving only one gene promoter and one enhancer at a time. Because many key developmental genes are regulated by multiple enhancers, I wanted to understand how these elements function together to make sure that the right genes are expressed, in the right cells, at the right time.

Searching for another way to access single-cell data, we realised that the long DNA strings in the 3C library are derived from single alleles in an individual cell. This meant that if we could develop a way to read out several neighbouring fragments in this string, we could gain insight into how multiple elements interact together within individual nuclei, despite performing the 3C prep in a bulk population. However, reading out multiple fragments from the concatemer is not trivial due to the limited read length of high-throughput sequencing platforms. This is why most 3C approaches to date focus on pairwise interactions. To overcome this limitation, we used an optimised oligonucleotide capture step to enrich for regions containing multiple contacts with small DNA “viewpoint” fragments of interest in the 3C library. As these viewpoints are selected to be relatively short, ligation junctions with multiple neighbours can be identified in a short sequencing read with high efficiency. The resulting technique – “Tri-C” – can therefore identify interactions between three or even more fragments occurring simultaneously at single alleles.

By analysing three-way interactions in millions of cells, we could infer the general rules of dynamics and structural cooperativity between multiple elements. We demonstrated this by using Tri-C to study the well-characterised mouse alpha-globin locus. We found evidence for three-way interactions between multiple enhancers and the alpha-globin promoters in single cells. This suggests that enhancer elements structurally cooperate to switch genes on in complex 3D structures. It is likely that these complexes function as “regulatory hubs”, to which the transcription factors that are required to switch genes on or off can be recruited with high efficiency. The formation of these hubs also provides a possible function for seemingly redundant regulatory elements, which might have a structural role in facilitating the formation of hubs that enable robust recruitment of all the factors required to (in)activate transcription.

Our analysis of the alpha-globin locus shows that Tri-C provides a useful new tool to investigate the dynamic 3D conformation of gene loci of interest. Existing techniques such as Capture-C already provide a simple way for researchers to analyse which regulatory elements can interact with a locus of interest. Tri-C however offers a new method to interpret such interactions in three dimensions, allowing for a more complete picture of how multiple elements at a locus of interest interact and function together.