In early December last year, a group of five undergraduate students from PETROC College in Plymouth visited the WIMM in order to get a taste of what life as a research scientist might really be like. In this blog, Sarah Huxtable (Programme Manager and Lecturer, Genetics and Physiology) tells us just how rewarding the students found their visit, and how great the cake was!

Two years ago the MRC WIMM kindly arranged a wonderful day at the Institute for Plymouth undergrads, hosted by Dr Peter Canning (a postdoc in Terry Rabbitts’ lab). Following the success of this, I approached Dr Bryony Graham to ask if she would kindly organise a similar visit for our new cohort – and to our delight, she agreed!

Our students are first and second year BSc students who spend their first two undergrad years at Petroc College in North Devon, after which they can graduate with a FdSc or complete their third year at Plymouth University to gain a BSc (Hons) in Human Bioscience.   After graduation, ,many students aim to go on to further study or into industry, and a visit to the MRC WIMM opened their eyes to the academic opportunities available to them post-undergraduate study.

The day started with a safety briefing from Dr Kathryn Robson who brought a sense of humour to a serious topic and she also spoke about her own career and research. The students had the opportunity to chat with Dr Robson, Dr Canning and Joe Frost (a second year DPhil student in Hal Drakesmith’s lab) over coffee. They gave real insight into PhDs and their own areas of current research and the students said that this was incredibly inspiring.

After this much needed coffee break (due to an early start leaving the west country!) Dr Jessica Davies gave an accessible lecture on her work on Multiple Sclerosis. Dr Davies’ talk was pitched at just the right level and the students remarked how she made a very complex subject easy to access. Dr Dannielle Wellington (a postdoc in Tao Dong’s lab) and Dr Mohsin Badat (a clinical training fellow working with Doug Higgs) then joined us and spoke about their very different career paths to date. One student remarked that she felt a lot more relaxed now about not having a set career goal but that it was ok to just pursue science and see which areas she enjoys before setting on a particular area.

A lovely lunch of sandwiches and particularly lovely cake was laid on and the students picked the researchers’ brains further before attending a seminar by Professor Stefan Mundlos on 3D chromatin folding. This was a wonderful seminar and although I myself didn’t understand everything he said, it tied in nicely to our syllabus and showed the students just how much depth topics can be studied in and that we are always learning new things about biology. It introduced students to the technique of gene editing using CRISPR (which they will look at in their second semester of their second year) and reinforced the concept that chromatin folding and gene regulation are functionally linked. The lecture was made more accessible by Professor Mundlos’ humorous analogy of boundary genes to the separation of Berlin by the Berlin wall. 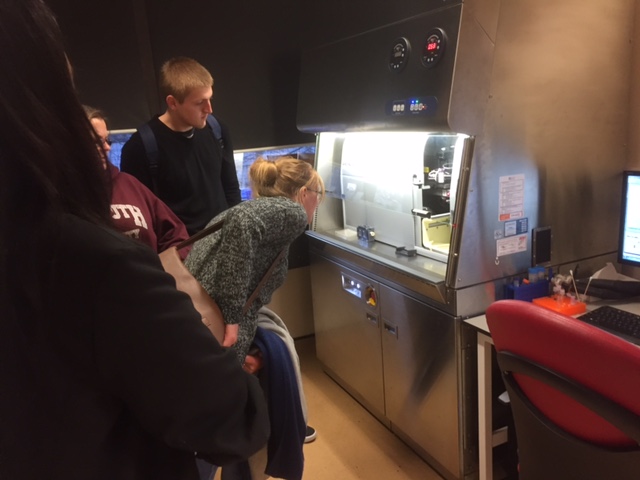 The afternoon tours of the Higgs/Hughes labs and the flow cytometry and imaging facilities put abstract concepts the undergrads study into context. A talk from Martin Larke (DPhil student in the Higgs/Hughes lab) on Alpha globin was particularly apt since the second year students had an essay to submit on this the following week (he had even prepared a referenced handout!) The images of mitosis shown to us by Chris Lagerholm were stunningly beautiful and ignited a sense of wonder in us all – what a wonderful and complex body we have!

Myself and the students would like to thank Dr Bryony Graham and all the researchers and staff who gave up their time and put in so much effort for this eye opening and academically stimulating day – I think I counted more than 15 members of staff who were directly involved – thank you to all.

On 29 September the University put on its largest-ever public engagement activity across several locations and well into the evening. The Curiosity Carnival aimed to engage people from all over Oxford in the exciting and varied research that goes on within the University. Dannielle Wellington, a postdoc in the Dong lab, spent the last 4 months organising one of the highlights of the night – The Blood Factory. In this piece she tells us more about what it was like to be involved.

The Fugger lab reports on their participation in 'Brain Diaries', an exhibition that aimed to show to the public how the latest neuroscientific research is transforming what we understand about our brain – from birth to the end of life. how they got on presenting their exhibit to those that attended Super Science Saturday.

The science behind the headlines

Tomasz Dobrzycki describes just how rewarding it was to participate in the 'Super Science Saturday' at the Museum of Natural History in Oxford, a special themed event on the science behind the headlines.